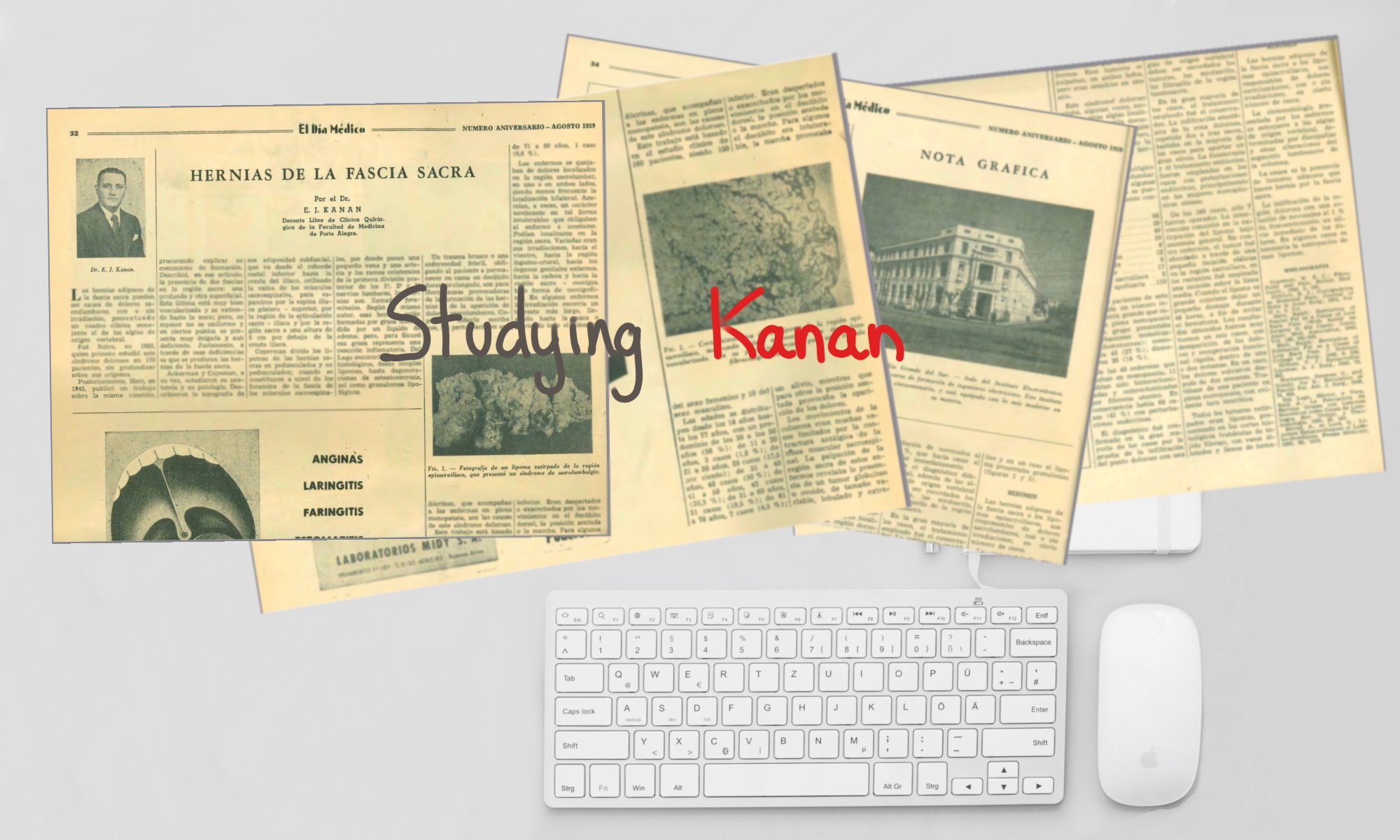 This is a Spanish written article published in Argentina in 1959 about the Hernias de la Fascia Sacra (also named back mice).

He was the president of the Brazilian Society of Traumatology from Rio Grande between 1948 and 1953. 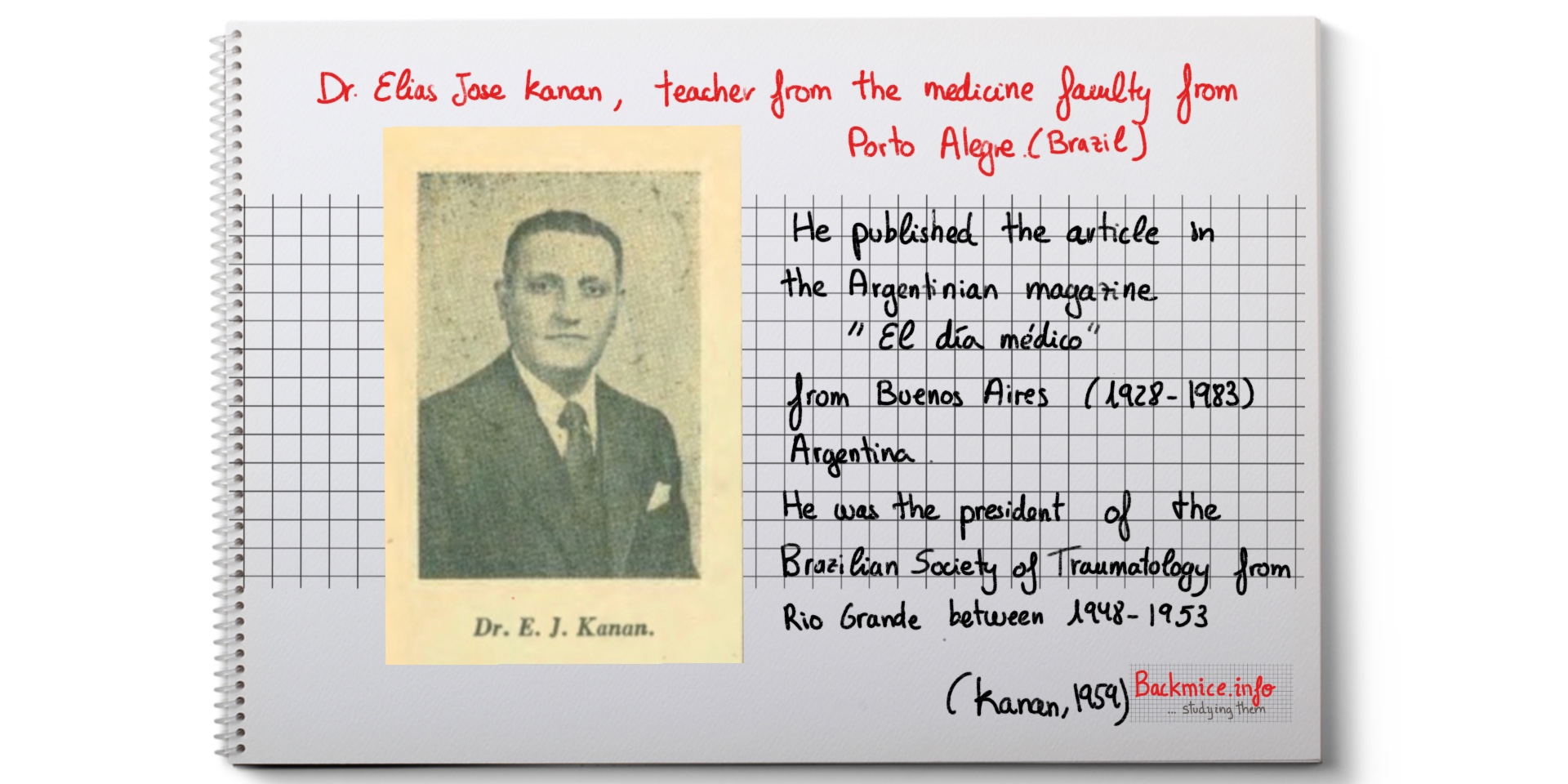 Summary: A study of 160 patients presenting fatty hernias mainly managed by local anesthetic; maximum 3 infiltrations; just 7 underwent surgery with good results. Reference to the work of Copeman and the studies of many surgeons from the 50s (Dittrich, Herz, Hucherson, Hittner…).

Dr. Kanan starts saying that the hernias of the lumbosacral region can give rise to low back pain with or without radiation VERY SIMILAR to the pains of vertebral origin. 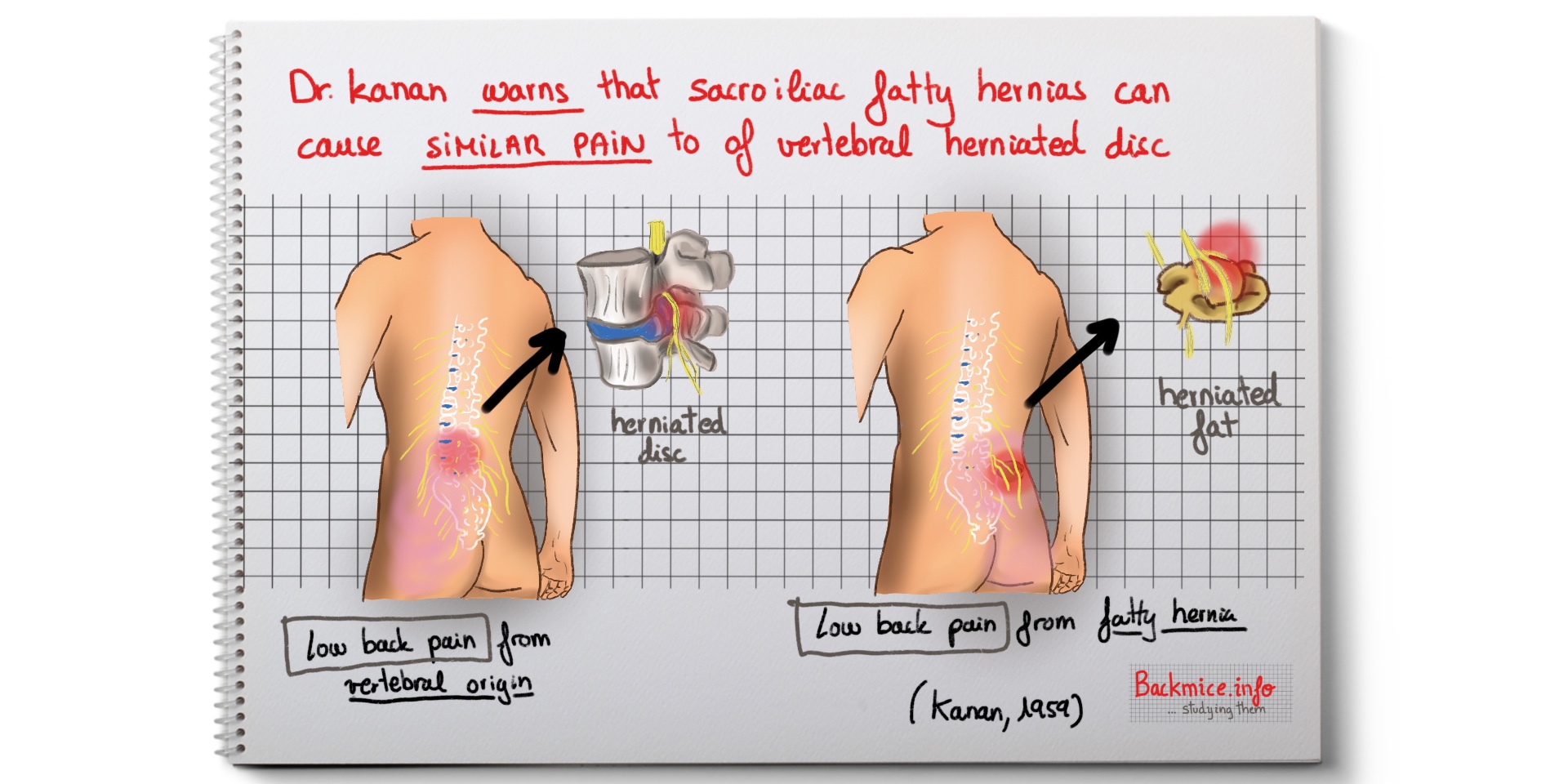 He comments on PREVIOUS STUDIES

He mentions Sutro, who in 1935 studied 170 patients without really going deep about etiopathogenic factors.

Later, Herz in 1945, published an article trying to figure out the etiopathogenic origin. Herz described TWO FASCIAL LAYERS in the sacral region (deep and superficial). The fascia is very vascularized and extends all the way to the cervical region. In certain regions it is weak and it can produce fat hernias.

Ackerman and Copeman, described the anatomic distribution of the subfascial fat, and described types of hernias (pedunculated, non-pedunculated and foraminal).

Copeman and Ackerman stated that the fat hernias were painful because they were distended by EDEMA. But other authors like Sicard said that the fat has an INFLAMMATORY reaction. Dal Lago found several results from simple lipomas in the histological studies, from signs of esteatonecrosis to ‘granulomas lipofágicos’.

Herz thought that an acute trauma or a febrile illness with prolonged bed staying could be precipitating causes of the formation of the fat hernias through the fascia. Copeman also related this syndrome to endocrine dysfunction in the menopause phase.

The patients complained from LOCALIZED LUMBAR PAIN, unilateral or bilateral. Sometimes with a sharp character that forced the patient to lie in bed.

The pain radiation could be to several regions: abdomen, genital region, coccygeal, hip, neck or leg.

The pain could wake them up turning in bed, sitting or walking. Although some got relief from walking.

-The back movements seemed limited by the ANTIALGIC CONTRACTURE from the back muscles.

-When exploring these patients, the presence of a “GLOBULAR or OVOID” tumor, of variable size, sometimes LOBULATED could be FOUND in the lumbosacral zone.

-The tumors could be palpated in both sides, but usually JUST ONE SIDE was painful.

-They could be associated to other pains like in the cervical region.

The patients with lumbosacral hernias could present diverse radiological findings:

-43 were menopausal and 26 had dysmenorrhea.

-11/43 had undergone histerectomy and oophorectomy.

LOCAL ANESTHETIC INFILTRATION with NOVOCAINE 1% that relieved the pain immediately CONFIRMED the diagnosis.

It is important to make the differential diagnosis with ailments of vertebral origin, tumors, miofascitis and fibrositis from lumbosacral region.

MANAGEMENT OF THE CASES, mainly by local infiltration

The majority of patients followed a conservative treatment just with local anesthetic infiltration. In the majority of cases, THREE TIMES was enough for a great relief. 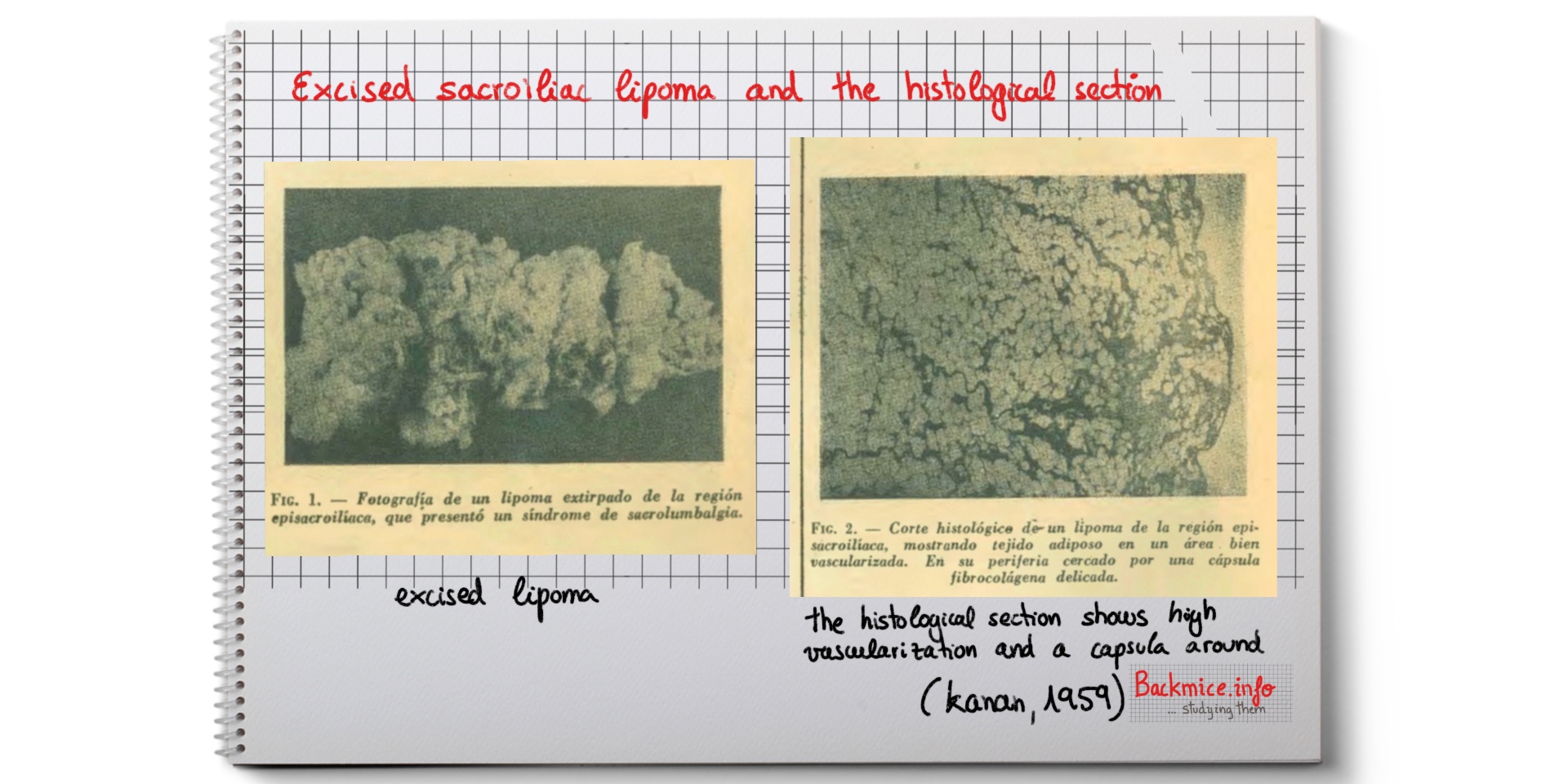 Surgery technique: The tumor was dealt with an incision in the sacroiliac region oblique or over the midline. If the lipoma was big, it was important to leave a drainage for 48 hours to avoid hematoma.

The results were very good in 6 cases, with complete recovery after 1-2 weeks.

In one case, the pain came back after 2 weeks with a patient in FULL MENOPAUSAL and neurotic profile.

ALL the excised tumors were LIPOMAS.

They had ‘trabeculas de tejido fibroso’ with DILATED VESSELS filled with red blood cells. In one case there were granulomas.

The fatty hernias from the sacral fascia or the episacroiliac lipomas are responsible for sacrolumbar pain with or without radiation. Their symptomatology resembles the pain of vertebral origin. The management with LOCAL ANESTHETIC gives an immediate relief that sometimes is enough, other times surgical excision is necessary.