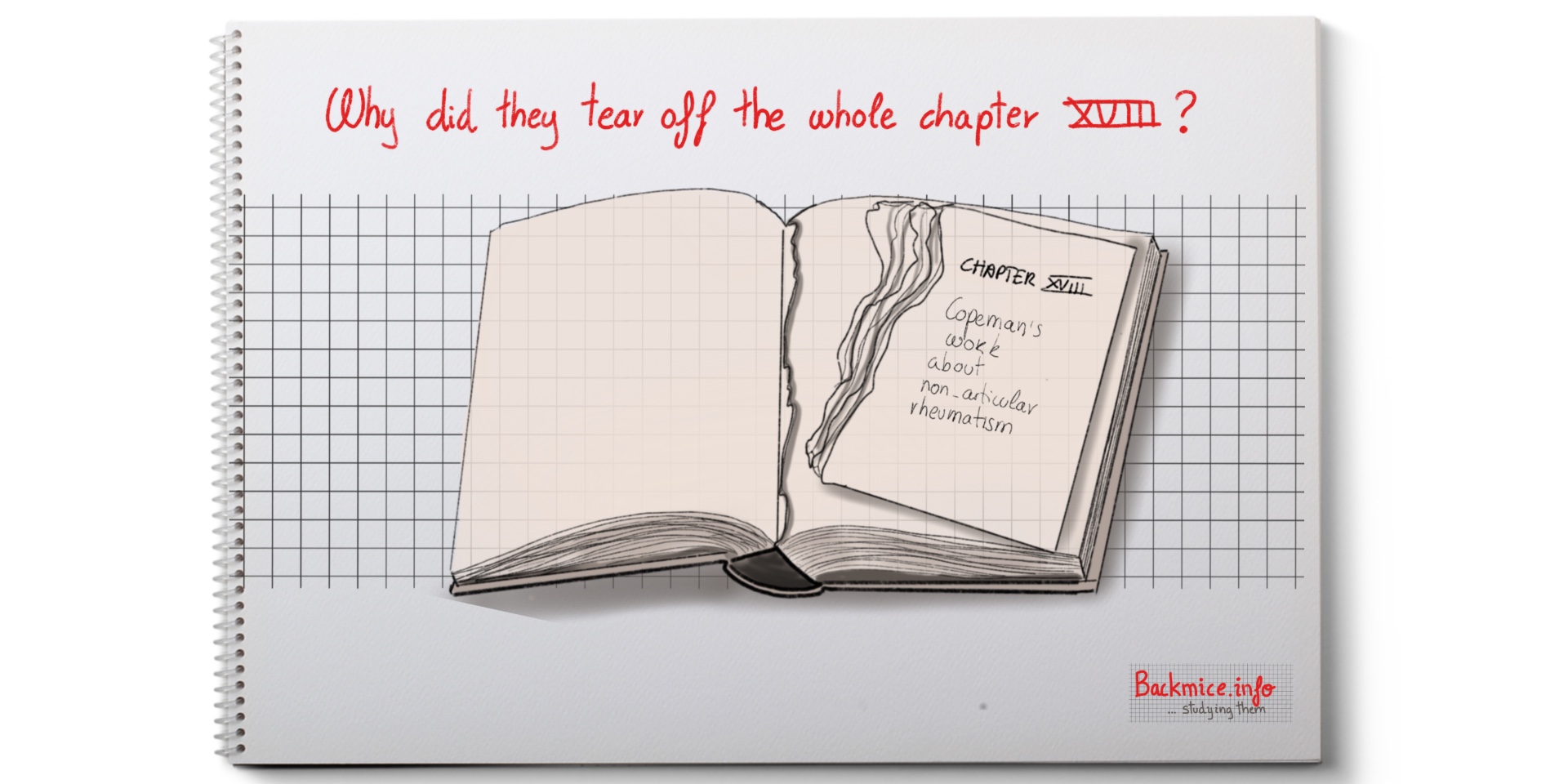 What has astonishingly surprised me while reviewing the medical bibliography about “backmice“? I found out that, somehow, at certain point in medical history (around 1978) some authors that were reediting the fifth edition of a book decided just to ignore all the previous work done by previous researchers that was explained in the forth edition of the book: Textbook of the Rheumatic Diseases (edited by W. S. C. Copeman, 1969).

The Fourth Edition of Textbook of the Rheumatic Diseases (1969) includes chapter XVIII, where Copeman discusses all the knowledge of the clinical entities he calls “non-rheumatic diseases”. All the information of this chapter is somehow ignored in the Fifth Edition of the same book, which was published some years later, after Copeman’s death in 1970.

Why did they tear off the whole Copeman’s XVIII chapter?

Doctor William Sidney Charles Copeman (1900-24 November, 1970) was a well-known rheumatologist and medical historian. He was the first editor of the famous book Textbook of the Rheumatic Diseases that was published for the first time in 1948 (by then, it was published by E. & S. Livingstone and had 612 pages).

Copeman was the editor from the first to the fourth editions of the Textbook of the Rheumatic Diseases (1948, 1955, 1964, and 1969). During those years Copeman had been publishing about an entity related to a dysfunction (edema, distention and herniation) of the fibro-fatty tissue that could explain some “rheumatic pains”, including low back pain. He used the term “non-articular rheumatism or fibrositis“.

By then, Copeman and his colleagues didn’t call it “backmice“, but it is the same entity understood as “deep subcutaneous painful fibro-fatty nodes or masses between the superficial and deep fascia that on pressure can elicit pain”.

He published the following medical articles about it (you can read about them in backmice.info)

Even in the II World Congress of Rheumatology held in Barcelona in 1951 he spoke about it.

Obviously, in the Fourth edition of Textbook of the Rheumatic Diseases, which he edited in 1969 (with a total of 959 pages), he included his and other researchers’ theories about what he referred to as the non-articular rheumatism (also named by them fibrositis after Gowers, 1904).

In chapter XVIII of Textbook of the Rheumatic Diseases (fourth edition), from page 504 to page 523, he exposed his personal work but also reviewed and mentioned other theories and the work of other researchers, while admitting that there was still a lot to study. 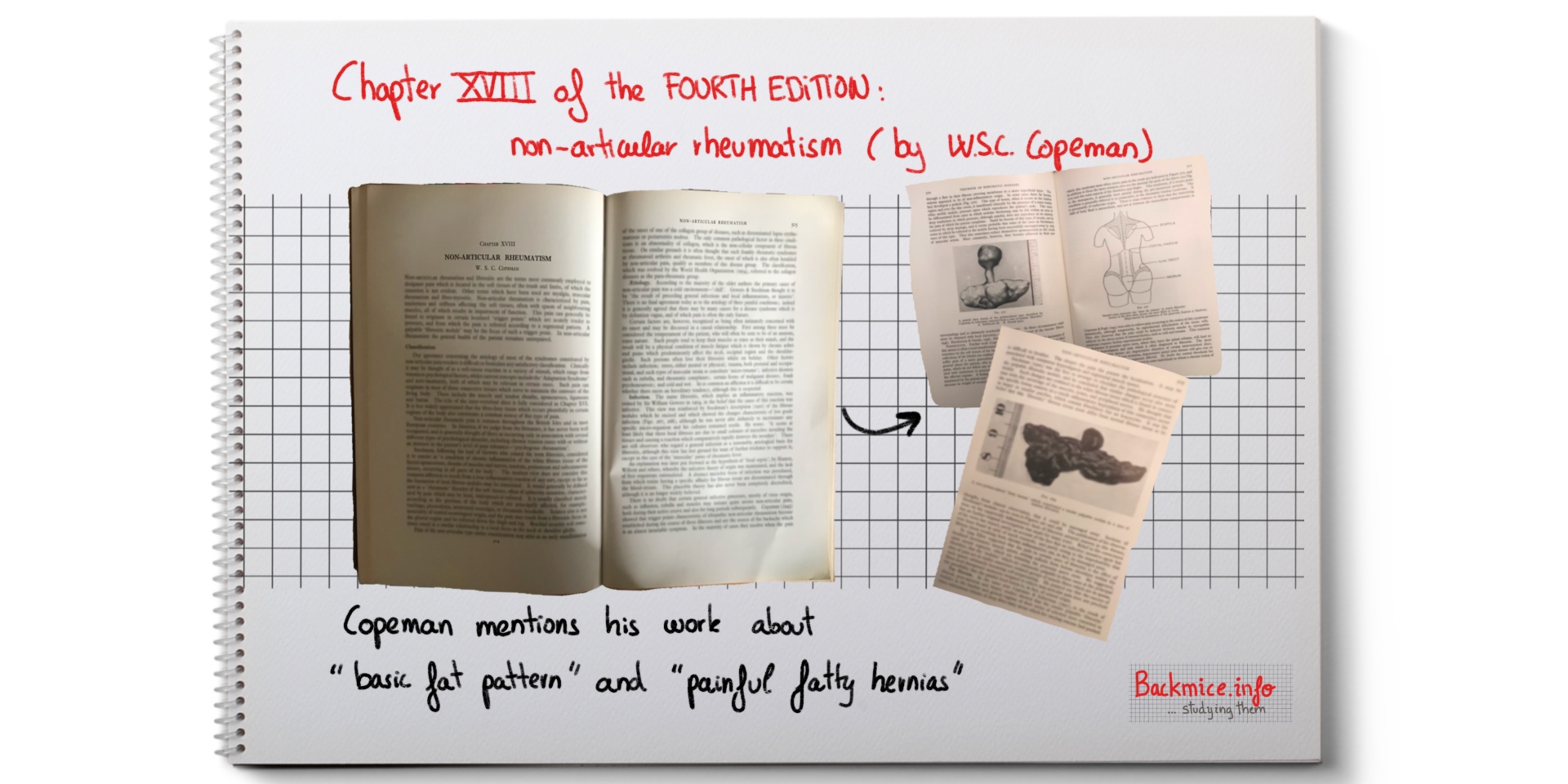 In the introduction of chapter XVIII “Copeman starts saying”:

“Non-articular rheumatism and fibrositis are the terms most commonly employed to designate pain which is located in the soft tissues of the trunk and limbs, of which the causation is not evident” (other terms were myalgia, muscular rheumatism and fibro-myositis). Patient suffers pain, tenderness and stiffness affecting soft tissues, with spasm of neighbouring muscles. There may be a “fibrositic nodule“, that may be the focus of a trigger point. General health of patient remains unimpaired.

The chapter includes his theories about “the basic fat pattern” and “the painful fatty herniae or lobules” and their relation to rheumatic pains, such as low back pain. Nevertheless, he also mentions in the chapter that in the differential diagnosis of lumbar pain, it should also include the disc lesions (among others).

They used his name and ignored his work

After Copeman’s death in 1970, the fifth edition (published in 1978) is edited by J. T. SCOTT. Surprisingly, they called the book COPEMAN’S TEXTBOOK OF RHEUMATIC DISEASE. What an irony! They used Copeman’s name in the title but they skipped his work indiscriminately.

In this fifth edition, nothing appears about the entity of the fibro-fatty tissue dysfunction and its related syndromes (including low back pain) that Copeman studied and postulated. Not a single mention or explanation about Copeman’s previous work. It really seems they just tore off the complete chapter. 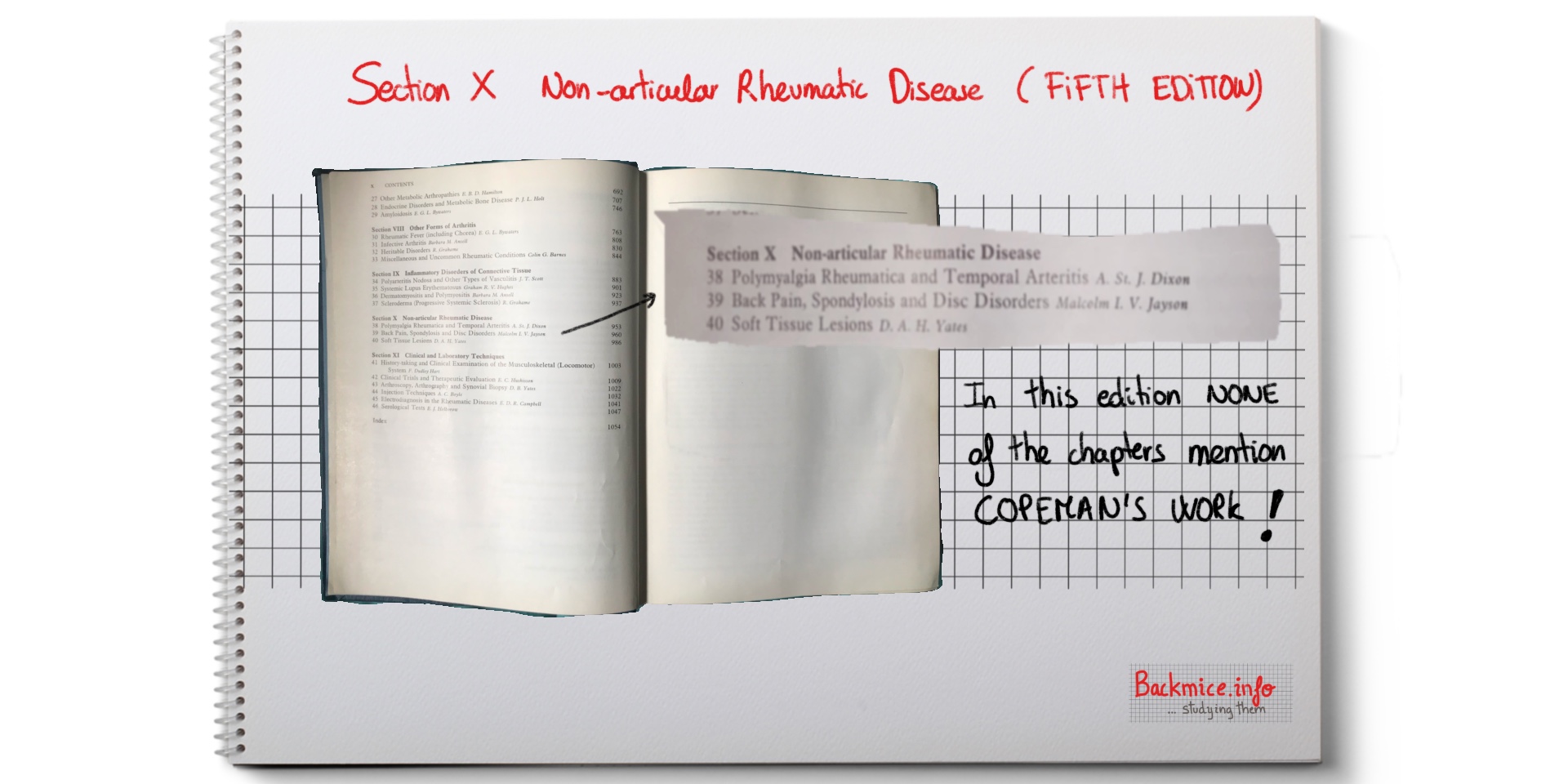 Section X of Scott’s fifth edition (1978) has 3 chapters grouped as “Non-articular rheumatism” (it corresponds to chapter XVIII of the fourth edition).

Chapter 39 (from page 960-985) focuses on low back pain. It is entitled “Back pain, spondylosis and disc disorders” written by Professor Malcolm I. V. Jayson (who later published several books about back pain). 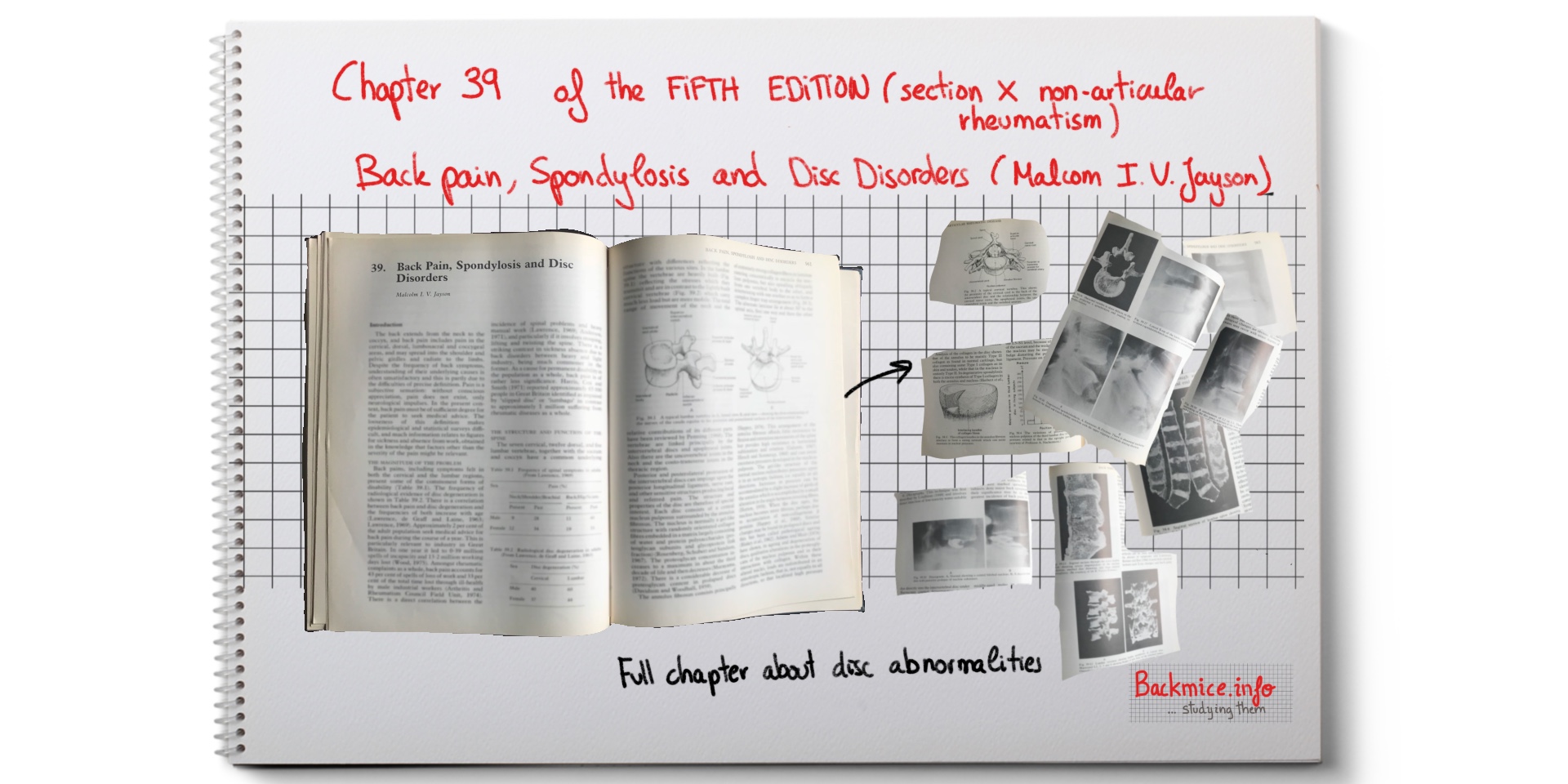 By the way, a priori I would think that in a chapter called NON-ARTICULAR Rheumatism, disc abnormalities shouldn’t be included since it is part of an articulation but, anyway, let’s continue.

In chapter 39 of Scott’s Fifth edition, there is a paragraph entitled “Non-Specific Low Back Pain” (page 974), where it is suggested to use the term “non-specific low back pain” for those patients that have recurrent episodes of back pain which defy accurate diagnosis since the spinal X-rays may be normal. They specify that these patients may be suffering from pathologies still unproven or that have no general agreement; that’s way it is suggested it is better to group them under the term of “non-specific low back pain”.

Later, in this small paragraph and without any references or so about them, you can find these 4 lines:

“Fibrositis” and “fibrositic nodules” describe localized areas of tenderness and painful nodules possibly due to herniation of fibrous or fatty tissue through fascia”. 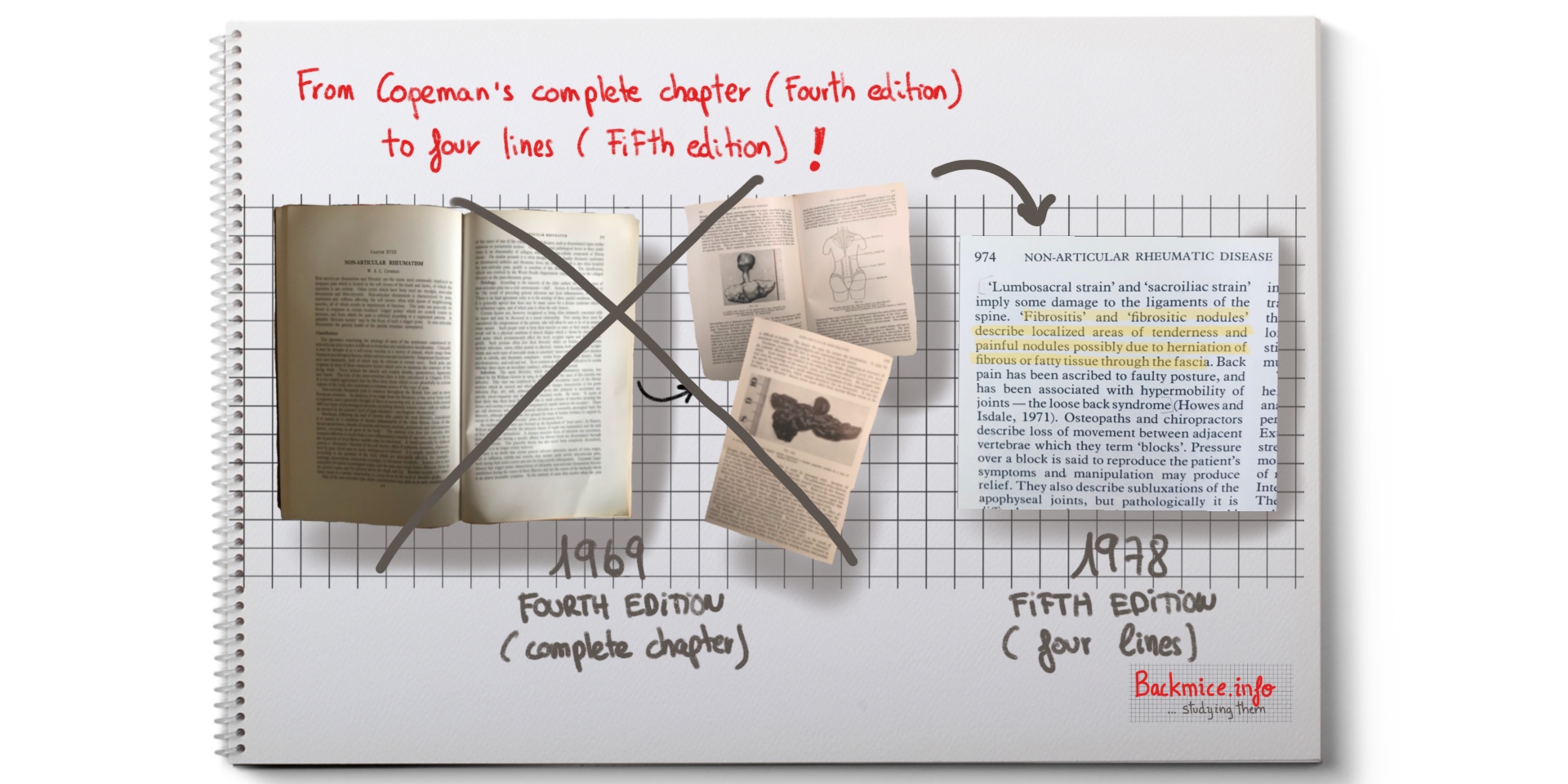 There is no further information, not even a reference to the author. From Copeman’s complete chapter… to four lines: literally.

WHY did they just ignore a chapter without even discussing about it?

Everybody should agree that even if Copeman and others were wrong in their views, results and theories, it doesn’t mean a complete chapter can be ignored. It is not just about respect for the author’s work, it is about respect for the knowledge of humanity, that sometimes it is constructed by big hits and big mistakes.

If the medical community in the seventies considered the “fibrositic nodules” were out of interest, they should discuss why in the book.

From my point of view, the entity should be at least just discussed, further studied and refuted. They should refute every single one of the previous theories about Copeman’s thought and many others that agreed that the fibro-fatty tissue could explain SOME cases of low back pain (and other pains) instead of just ignoring them intentionally.

A HISTORY ERROR that we all are paying

I’m afraid that this history error in the seventies (ignoring previous work) has led to a delay in our knowledge of one of the most common ailments of humanity: low back pain.

This action of ignoring previous work without refuting it has probably been a terrible decision, and has led to many mistakes and delays about clearing up one of the many causes that may exist of one of the most common medical conditions, which we still call “UNSPECIFIC” LOW BACK PAIN.

Maybe if we go back to Copeman and others’ work and we study their hypotheses and postulates about the fibro-fatty tissue related to back pain further, we will finally advance a little bit more about these intriguing common pathology. We should learn from our mistakes and we should go further without getting stuck on the way by prejudices.Let’s do it for the good of patients!

I am just focusing my study on backmice, and I suspect maybe Copeman was closer to the truth. Now I wonder: How many more chapters did they tear off?